Do you know how to use the new features of the Edit Channels transformation in BrainVision Analyzer 2?

I would like to use this opportunity to present the new features available in the Edit Channels transformation in BrainVision Analyzer 2. The aim of the latest update is to offer a more straightforward and time effective manipulation of channel properties. You can now select a range of features that include changing the order of the channels or loading/ saving channel positions from/into an external BrainVision electrode file. Another highlight is the “copy/paste” functionality which saves a considerable amount of time when re-naming channels and/or altering positions.

In this article I will present three typical examples of how the new features of Edit Channels facilitate your daily analysis.

It is now easier to define the channel properties for the case of EEG data recorded using caps where the electrodes are not placed according to the 5% international system. You can copy the channel labels and positions stored in another file (see table in Figure 1) and paste them directly into the corresponding column of the Edit Channels interface simply by right-clicking on the relevant cells (see Figure 2A). Note that the typical keyboard shortcuts can also be used (e.g. CTRL-C; CRTL-V).

Figure 1: Table containing the original labels and positions of the equidistant channels. 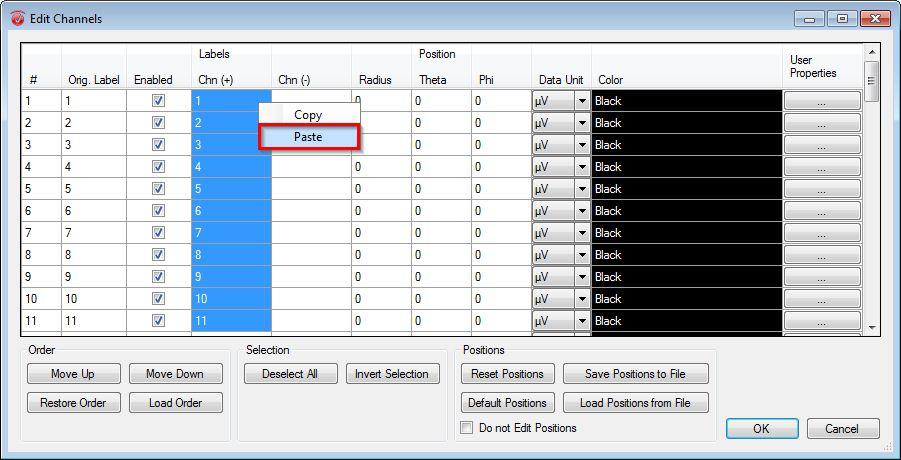 Figure 2A: How to copy/paste information from/into the Edit Channels interface. The options “copy/paste” can be selected when you right-click on a group of cells.

After filling out all fields, you should press the “OK” button and then the channel properties will be updated (see Figure 2B). 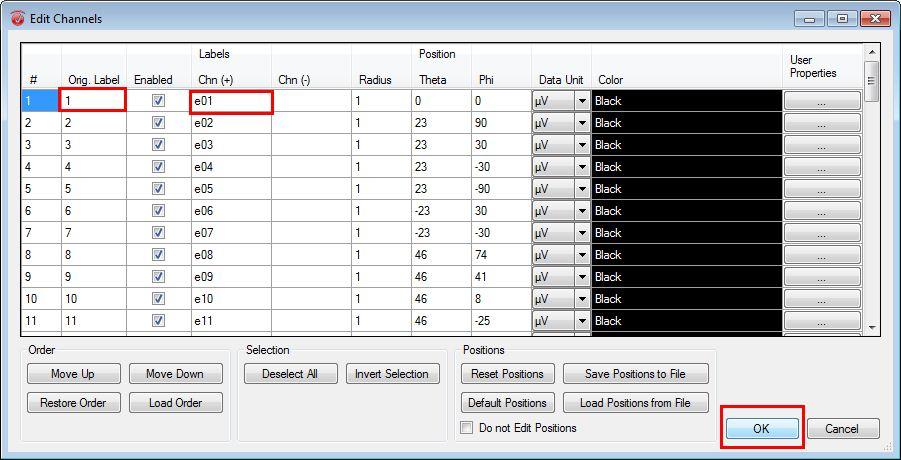 Figure 2B: Defining labels and positions for equidistant channels. Please note that the labels of the channels were changed from numerical values to characters (red boxes). You need to select “OK” so the new channel properties will be stored.

Please note that in this particular example (see Figure 2B) alphanumeric channel labels were introduced (e.g. channel 1 was changed to channel e01). Using labels containing characters is a good approach, especially when you intend to use the Formula Evaluator transformation. This transformation does not interpret numbers as channel names (e.g. 2 – 1 ≠ channel 2 – channel 1).

After updating the channel properties of a single dataset, it is possible to apply the same procedure to the remaining datasets in the workspace either by using the “drag and drop” functionality or by creating a history template.

It could be also the case that the same type of caps has already been used (or will be used) when recording another EEG experiment. In such situations it would be useful to store these channel labels and relevant positions in a BrainVision electrode file which could then be automatically loaded when analyzing another workspace. The current Edit Channel transformation includes an extra feature called “Save Positions to a File” which makes it possible to create a BrainVision electrode file containing the information available in that node (see Figure 3). This file will be stored in the export folder associated with the current workspace. When processing a new workspace the BrainVision electrode file can be loaded using the new feature “Load Positions from File” in the Edit Channels interface. Another option is to set this file as the default using the option “File > Preferences > Electrodes”. This means that BrainVision Analyzer 2 will treat those labels and coordinates as the defaults when it reads in new datasets. 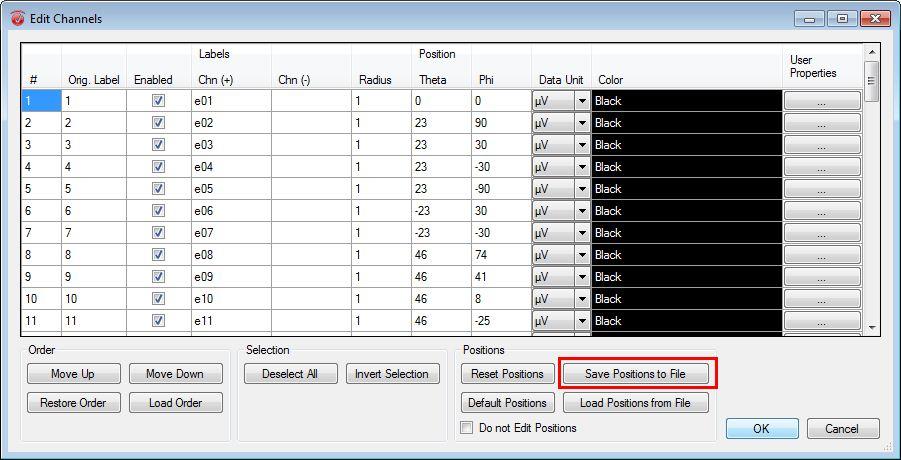 Figure 3: A BrainVision electrode file can be created using the new feature “Save Positions to a File” in the Edit Channels interface. The *.bvef file will be stored in the export folder associated with the current workspace.

Case 2: Changing the order of the channels in a dataset

Maybe not all of you are aware that in BrainVision Analyzer 2 the channels across datasets are matched in terms of their labels and not their order within the dataset. This means that even when the order of the channels differs between datasets the transformations deliver meaningful results.

Nevertheless in certain situations it may be useful to re-order the channels. A typical case would be to avoid inconsistencies when exporting the datasets into a software package where channels are matched by the order. Let us assume that for a particular dataset the occipital channels O1 and O2 had to be excluded during the pre-processing and were afterwards interpolated using the Topographical Interpolation transformation. Note that when the channels selected to be interpolated are not part of the current node, they will be added either at the top or to the bottom of the dataset. In our particular example O1 and O2, originally stored in the ninth and tenth position, would be stored in the last two positions after using the Topographical Interpolation. It is now possible to re-arrange the order of the channels by using the new features “Move Up/Move Down” in the Edit Channels interface (see Figure 4A). In this case you could then easily re-order these two channels to their original positions in the dataset (see Figure 4B). 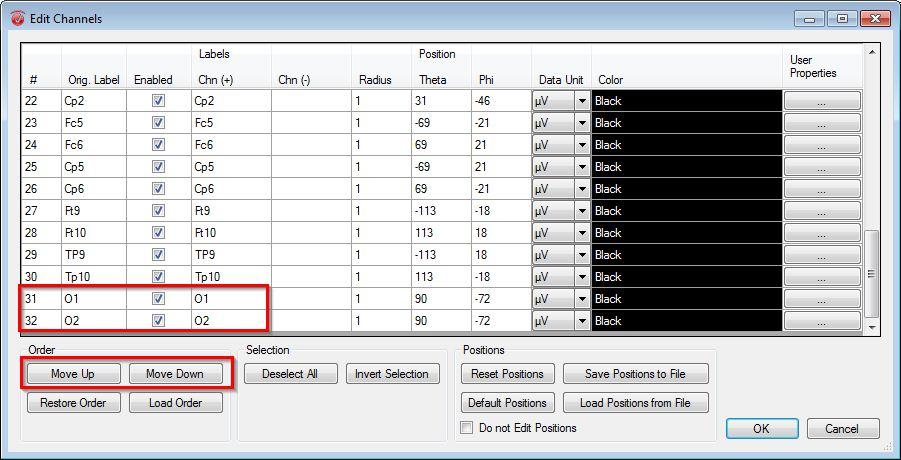 Figure 4A: Channels O1 and O2 are not stored in the original positions (9th and 10th position)

Figure 4B: Channels O1 and O2 were re-ordered back to their original positions using the new features “Move Up/Move Down” in the Edit Channels interface (shown in Fig. 4A).

Many EEG laboratories use tracking systems in order to measure individual electrode positions. As explained in case 1 it is now straightforward to define the respective individual positions for each dataset using, for instance, the “copy/paste” functionality. However there may be situations afterwards where during the analysis you may want to change a particular label for all datasets without affecting the respective individual positions. One typical example is where you want to rename the ocular channels (for instance using the labels HEOGL and HEOGR) and include this step in a history template. In order to be able to rename these two channels in the different datasets without changing the individual positions, the user should select the new option “Do not Edit Positions” in the Edit Channels interface (see Figure 5A). The output would be an update in the channel labels without affecting the original individual positions (see Figure 5B). 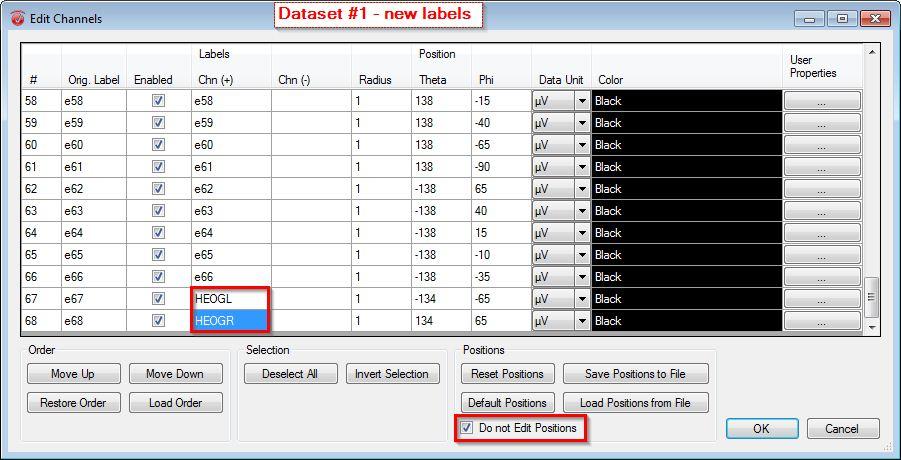 Figure 5A: Changing the channel labels in Dataset #1 without changing their positions. The output node will be used in a history template (not shown).

Figure 5B: After running the template, the channel labels were updated in Dataset #2 but the individual positions were not changed. This was possible because “Do not Edit Positions” (shown in Fig. 5A) had been selected in the Edit Channels interface.

I hope that after showing you these three cases you are convinced that the Edit Channel transformation now includes a set of versatile features that significantly improve the manipulation of channel properties.